If you live in Northern California or are ever visiting and you’re a podcaster, I highly recommend you make the “podcaster’s pilgrimage” to the TWiT Brick House in Petaluma, California. The best part is that anyone can walk right in and see the studio for themselves. Here’s the experience through my eyes and lens.

Following a week in Las Vegas, Nevada where I attended and spoke at New Media Expo, my friends and fellow podcasters Mike and Izabela Russell were taking an extended vacation which included a visit to San Francisco. At first, I was planning to show them wine country in the Napa Valley, a great California experience but then it hit me, what’s in wine country and specifically tailored for podcasters? TWiT!

We met in Petaluma on Sunday the 12th of January which in California still includes perfect weather, 67 and sunny (at least that day). I picked Sunday specifically because Leo records his weekly tech show, This Week in Tech, every Sunday at 3pm. I didn’t just want to see the studio, although that would be great by itself, I also wanted a chance to meet and speak to Leo himself, one of the original podcasting pioneers. I suggest if you want to do the same you reserve your spot because even though anyone can walk in during operating hours there are only twenty to thirty seats available for watching the live show. 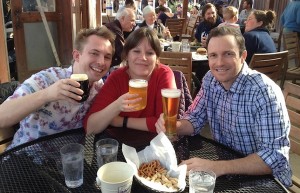 Petaluma is a small town that’s been referred to as the “gateway to wine country” but they also have a great little brewery, Lagunitas. So we made the trip a few miles down the road to the brewery for lunch and it was a good choice. Great beers and fantastic food made it the perfect pre-TWiT gathering spot. 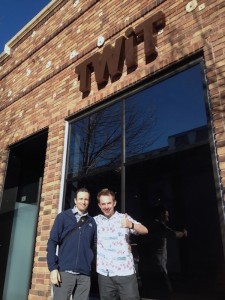 House for more reasons than one. To start with, it’s made of bricks, pretty obvious. But to help fund the more than 1.2 million dollar studio, Leo sold bricks that you could put your own message on that were placed in the entrance of the studio. This is the second time in my life I failed to buy a brick with my name on it when I knew I should have. The first was the building of AT&T Park, home of my beloved San Francisco Giants, World Series Champion, S.F. Giants;) I waited my whole life to type that;)

After signing in at the reception desk, you walk down a dimly lit hallway that is decorated with signatures of some of the more well known guests to pass through TWiT, pretty much all the first gen. podcasters. I looked for a pen to put my own mark on the wall but there was 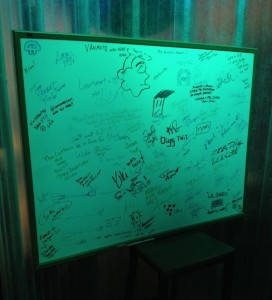 none to be found.

After you pass by the wall and VIP whiteboard (my term not theirs) you enter the studio space. This is where the podcasting happens. You pass by a Leo’s office which is decorated to look like his original studio in The Cottage (the original TWiT studios).

Just past Leo’s office you enter the open spaced studios with the TNT studio on the left, a more casual studio space with couches on the right with the two sides separated by a row of desks where I suspect the business of podcasting is handled.

Just beyond that you find the center of the studio space which is dominated by a 360 degree, rotating, control hub. This is where the audio/video engineer sits and works all the controls for each show. It’s an impressive setup likely to make any podcaster envious.

On the other side of the control hub is the largest studio space, home of This Week in Tech, the flagship show; t 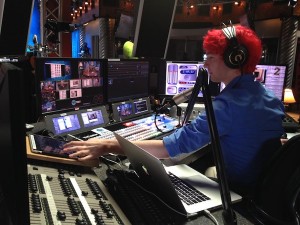 he podcast that launched a podcasting dynasty. TWiT was one of the first, if not the first, podcasting network to get big name advertisers thus making podcasting a profitable business or at least one you could make a living from. That’s a big deal. As a podcaster who makes a living producing podcasts, I’m excited to see more networks succeed and more podcasting jobs (dreams) created.

As previously mentioned, the studio space for This Week in Tech has seating for about twenty to thirty people. Nothing fancy, just simple folding chairs aligned in rows in front of the desk where the hosts sit. The seats are located along the main exterior wall of the studio facing the street. Surprisingly, near one of the fire exit doors, it was very easy to hear cars going by and people talking as they passed the studio. I tweeted about it:

Sitting next to a door at the TWiT studios & surprised you can easily hear traffic. Even the best has noise issues;) pic.twitter.com/hqdGv08uTU

If you’re not familiar with TWiT, it’s a long format podcast, often running one and half to two hours long. We were treated to almost two and half hours. The show itself was not the best I’ve heard, a little dry and slow (hard to top without Brian Brushwood) so I was surprised it 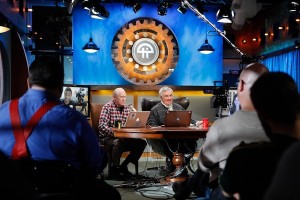 went on so long but the Consumer Electronics Show (CES) had just happened which made for a lot of content to get through. I was afraid Izabela was getting more than a little bored since tech is not her niche and honestly we were all starting to get a little tired but I knew everything would kick back into high gear as soon as the show ended. And I suspect that was half the reason I was getting antsy. I was eager for our possible photo op. with Leo.

The show ended and following Leo’s recording of the show intro’s, he started meeting with everyone in the studio audience, one at a time, at the “big table.” Leo dawned his fez and had enough to share with as many people who wanted to sit down. So one by one, people who didn’t mind getting on camera (the cameras are almost always live) and wanted to meet Leo stepped up to the table. Finally I handed off my cameras, gave some brief instruction to Mike (Canon 60D) and Izabela (my iPhone) and off I went. The next few minutes were nothing short of awesome.

I introduced myself to Leo and explained that all three of us were podcasters and that we were making the “podcaster’s pilgrimage” to see the legendary TWiT studios. I put on the fez and continued to explain what I did for a living… “a professional podcast producer”, thanking him for being a small part of that dream. 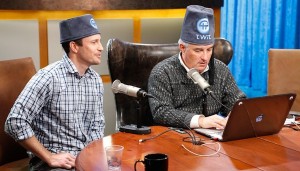 Leo asked me what my show was and within seconds he had The Podcasters’ Studio pulled up on his laptop. Then he really threw me off my game. He complimented the website and said, “I think I know you Ray…” While I scrambled to think if this was possible, I was pretty sure we hadn’t. This was my first time meeting Leo but if he looked at my site and then thought he recognized me, well I’ll take it!

Pictures were taken, smiles were had and the best part, I made it home in time to watch and capture the rerun which included the meet and greet at the end. I was surprised they replayed this part but was very happy as I was able to screen-cap it using Screenflow. Check it out!

Mike and Izabela took their turn at the table with Mike doing an impromptu voice over for Leo. Hey Mike, maybe you found a new client!;) #BigFish.

I think everybody had a great time, you can tell I did, and this is something I think all podcasters who love podcasting, production and tech should take the opportunity to do if they ever pass through my awesome part of the country, Northern California.