The NTG-1 shotgun microphone by Rode is the best mic I’ve used (in terms of audio quality) so far for DSLR video production. Just take a listen to the quality of the mic and learn why it’s important to get the microphone away from the camera and close to the talent.

Description comparison (as listed at B&H)

“The Rode NTG-1 Condenser Shotgun Microphone is designed for professional audio capturing in the field or indoors. With a history of manufacturing quality studio microphones, Rode has implemented low noise output electronics and wide bandwidth, both of which attribute to the NTG-1’s broadcast sound quality.”

In this video you can see I’m suing the Rode indoors. The mic performed really well and I didn’t have any issues with echo despite being in a fairly square, open room. Shotgun microphones can sometimes get confused when they recieve time delayed sounds that are a repeat of the sound they just took in however I didn’t have that issue with the NTG-1. One explanation is the proximity of the microphone to my mouth. I was really close to the mic. You can hear the mic really shine when used in the boom setup I used in the video.

behind and beyond the front of the microphone.

Paired with the Zoom H4n, the NTG-1 lived up to it’s “low noise” billing. The signal to noise ratio was fantastic providing great audio levels without a noise floor filled with hiss and hum.

While the microphone can technically be used handheld, I wouldn’t recommend it. There are much better mics for that type of application. In this demo the NTG-1 was mounted to an Impact multiboom light stand and reflector holder connected via a Rode shotgun microphone shock mount. This allowed me to move the microphone without introducing unwanted handling noise.

“The supercardioid polar pattern and line plus gradient acoustic principle effectively minimize audio and noise at the off-axis (sides) of the microphone, while the front of the capsule accurately reproduces incoming audio signal. The result is greater intelligibility and signal-to-noise ratio while using the NTG-1 in noisy environments.”

You can hear the effectiveness of the supercardioid polar pattern when I stand up from underneath the mic. My voice coming in from the side of the mic is much less audible demonstrating the mic’s ability to reject sounds that are not in it’s direct path. The NTG-1 seems like it would perform very well in a conference floor setting where you have lots of other noise besides the audio you are trying to capture. When used properly (on a boom with an dedicated operator) this mic would pick up your talent very well while allowing just enough ambient audio to give you a good feeling for the environment you are in. However, in this test I was doing a solo shoot with practically no noise in the background so you could get a good idea of the audio produced by the Rode. More testing in the field would need to be done for your specific shooting situation.

“The NTG-1 is powered with an external +48 Volt phantom power source; the output is a standard 3-pin XLR male connector.”

The NTG-1 doesn’t come with an XLR cable so you’ll need to purchase one of those if you don’t already have one. In this video, the Rode was powered using the H4n’s 48 volt phantom power supply. In order to use this microphone in a DLSR video type setup you will need something (such as the H4n) that provides phantom power in order for the mic to operate. For me this is the biggest disadvantage. Ideally the mic would be able to provide it’s own power, optionally through a AA battery. However, most ENG style camera’s have XLR connections and supply the necessary 48 volts of power.
If you are looking for a microphone to plug directly into a camera such as a mid-range, consumer type camera (ex: Canon Vixia) or into a DLSR directly, you’ll need a microphone that has the AA battery power option. Fortunately the NTG-2 has this option. It’s slightly bigger due to the extra space required for the battery but at only twenty more dollars it might be a good upgrade to consider.

“The microphone features a rugged, all metal, light weight enclosure that is ideal for camera mounting yet durable enough to withstand the rigors of heavy road use. The Rode NTG-1 is packaged with a microphone stand mount and windscreen.”

I would be really confident in traveling with this microphone. The all metal casing feels sturdy and this mic is the lightest microphone I’ve ever handled. This is a nice advantage to have in run and gun, one-man band situations where you are trying to stay light and have to handle most of the gear yourself. This mic adds virtually unnoticeable weight to your rig. The NTG-1 feels like it can withstand any environment and hold up to years of tough work. This is backed up by Rode 10 year warranty and I can see why they stand behind this microphone. It feels very durable. 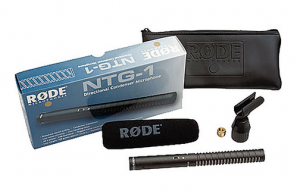 The stand mount and windscreen are relatively cheap add-ons but nice additions to supplement the microphone’s use. I would’nt rely on the windscreen to do much else besides protecting against minimal popping noise creating by your mouth (plosives) and very light wind. If you were working with the microphone outside you’d want to upgrade to the Rode WS6 Windshield (a.k.a.”dead cat”) for handling moderate to strong wind conditions. The provided pouch is a nice touch and would help to protect the mic in transit, not adding much bulk to your pack.

Specifications (as listed at rodemic.com)

Not listed here is the NTG-1’s optional “low frequency roll-off” switch. You can engage this switch to help reduce unwanted noise from air conditioners, rumbling traffic, etc. It’s not a magic switch that blocks out these noises but it does help reduce some subtle annoyances.

So what’s the final word? Simply put I would definitely buy this microphone. For only $250 you get a very high quality mic. This is the best audio I’ve recorded while making DLSR video. Of course this microphone would be a great addition to any camera setup. Since the microphone lacks the ability to power itself through a AA battery, it would be best if your camera had XLR connections and provided phantom power. If you need a mic that provides it’s own power, the NTG-2 is a great option especially for only $20 more. I would be more apt to purchase the upgrade. However, the NTG-1 is small and lighter and if you have a source of phantom power (48 volts) then the NTG-1 might be the best option.

The bottom line is this microphone lives up to it’s billing. Incredible audio, hardy construction and clean sound.