You’ve created your podcast ready RSS feed so what’s next? You need to send it out to the world!

There are many places your podcast can be found however you need to submit your show’s RSS feed to multiple directories and apps in order to have people find you.

On this episode, I talk about the top ten directories that send me the

most traffic and where you should submit your podcast first, in order to find the majority of your audience.

I also discuss Auphonic.com as a fantastic option for easy post production including the simplest way to make sure you are hitting proper Loudness targets for podcasting.
END_OF_DOCUMENT_TOKEN_TO_BE_REPLACED

Social sponsorship is sponsorship deal for the rest of us. The average podcaster does not carry the number of subscribers that most ad buyers would want to see for CPM based deals. Yes you can cultivate a one on one sponsorship with someone who has a relevant business but when it comes to asking for money it’s often a much harder sale. END_OF_DOCUMENT_TOKEN_TO_BE_REPLACED

I’m back in The Studio after spending a week in Las Vegas attending and speaking at New Media Expo 2014 (NMX). It was, as you could probably guess, a great time. If you’re a podcaster who enjoys meeting other podcasters and learning how to better your show, it’s hard not to have fun at NMX. Lots of great content and endless amounts of great people and conversations. 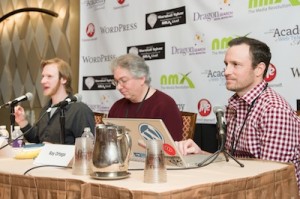 While at the conference, I spent the majority of my time talking with people I previously only knew from online interactions (twitter, G+, podcasts, etc) and meeting people I had never spoken to before. While the content at NMX (sessions) are great, you’re probably going to have the most fun  meeting people who spend most of their time in a world much like your own (they “get” you;)).

I had some other duties while at NMX, I was co-presenting a panel on How To Grow Your Podcasts From 100s to 1000s along with Dave Jackson and Daniel J. Lewis as well as recording a live Round of Podcasters’ Roundtable. END_OF_DOCUMENT_TOKEN_TO_BE_REPLACED

Adding a mixer to your podcast studio will allow your productions to grow along with your show.

As you get further along in your podcasting venture, you’ll likely want to add in more capabilities such as 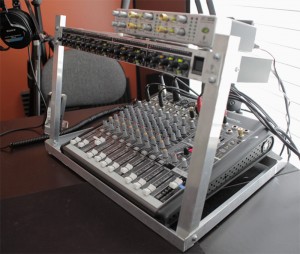 Skype hosts and guests, more in-studio microphones, and built in capabilities for backing up recordings to avoid loss of your audio. Having a mixer in your studio allows you to easily add in these and many more features as your skills and productions progress over time.

On this episode I explain the many ways a mixer allows you to easily expand your studio’s capabilities and what features you might want to look for when choosing your first mixer or upgrading your old one.

Submitting your show to new podcatchers is the best way to grow your audience fast. Make sure to submit your podcast to all the podcasting directories you can find and don’t forget the thousands of people who are consuming, searching, and using the Blackberry Podcast store. Go to the Blackberry Podcast Store to create an account and submit all your podcasts (audio and video) today.
right-click to download (3.5 MB|3.5 min.)

On this episode I talk about progress made in my experiments with html5 for audio and video, thoughts about sponsoring your own podcast, and new ideas about how to market your show with the intent of growing your audience.

We also have listener feedback sent in by Jerry of My Amateur Radio.com and Steve from Waves of Tech.com, who called in with their thoughts about TPS Ep. 31 where I asked podcasters their thoughts on apologizing to their audience.

Apple’s Develepor Site with Html5 Code for Audio and Video